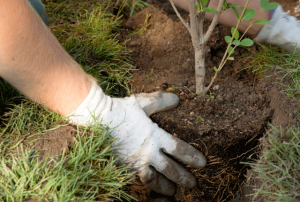 Bhutan’s gift to its newest royal is something that will benefit the entire country. To celebrate the arrival of baby Prince Gyalsey, residents of the Himalayan kingdom planted 108,000 tree saplings throughout the land, the BBC reports.

In Buddhism, a religion practiced by over 75 percent of the Bhutanese population, trees are a symbol of health, longevity, and compassion. All 82,000 households in the nation planted a tree of their own to represent a prayer for the young prince. Volunteers planted an additional 26,000 trees to bring the total up to 108,000, another nod to an important Buddhist symbol. One hundred eight is the number of defilements that block the path to enlightenment, and planting 108,000 trees is meant to signify a cleansing act.

The nation has a history of making ecology a top priority. According to Bhutan law, at least 60 percent of the land must be under forest cover at all times, a number the country currently exceeds by close to 15 percent. The country also holds the Guinness World Record for most trees planted in one hour.