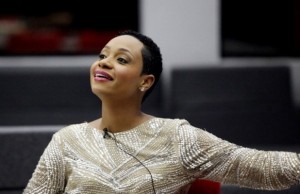 The 30-year-old entrepreneur, who is currently on vacation with her family in Dubai, showed off her well trimmed and sexy post-baby body while rocking a bikini on social media recently.

The pretty controversial Zimbabwean cutie also showed off her daughter for the first time since she gave birth to her last December.

Pokello, who looked exceptionally hot for a new mother, was also pictured with her 12-year-old son, Nathan who she had from a previous relationship.

Elikem and Pokello met at the Big Brother Africa Season 8 show and got married after three years of dating.