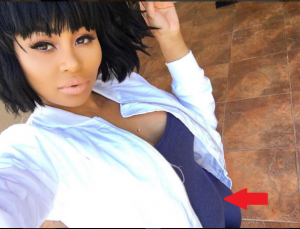 ‘Love and Hip Hop’ star Moniece Slaughter took to her Instagram on March 14, same day the rumors begun to ‘congratulate’ the former stripper on her second pregnancy.

“Impatiently waiting for her to make her pregnancy announcement,” Slaughter wrote beneath a photo of Chyna.

“I just know it has to be so. And if it so, let me just say…the petty slut inside of me will jump for joy and she will forever be my shero. Queen of pettyville USA! YAAAAASSSS CHYRO”.

According to MediaTakeOut, Chyna has been avoiding alcohol and weed smoking while on a trip to Jamaica with Rob, leading to a conclusion that she could be heavy. “The two are enjoying sun, fun, and non-alcoholic drinks and juices,” a source tells the site. “Chyna has given up smoking weed and drinking champagne. And for anyone that knows Chyna, she wouldn’t do anything so drastic —  especially in Jamaica — unless something was up.”

The source further tells the site that Blac is keeping the news a surprise, until she’s in her third month — “which is in just a few weeks.”