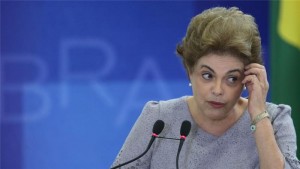 A legal request has been filed to impeach Brazilian President Dilma Rousseff for obstructing justice and fiscal accounting tricks, the second one against the leader politically embattled by her own government. The request filed by the Brazilian Bar Association (OAB) on Monday also involved Rousseff granting international football body FIFA tax-exempt status during the 2014 World Cup.

In reaction to the claims, Tourism Minister Henrique Eduardo Alves turned in a resignation letter on the same day, becoming the first minister from the Brazilian Democratic Movement Party (PMDB) to declare leaving Rousseff’s government.  PMDB, Brazil’s largest political party, is expected to abandon its alliance with Rousseff’s Workers’ Party and collapse the coalition government.

A party vote is expected to be held on the issue on Tuesday. Rousseff already faces an impeachment process over the alleged manipulation of government accounts that opposition parties maintain helped her win narrow reelection in 2014 by allowing her to boost public spending.

The president’s supporters tried to physically block the entry of the new impeachment request in the lower house of Brazil Congress, shouting the left-wing slogan “Não passaram!” meaning “They shall not pass,” while pushing and shoving opponents of the embattled president. Another serious impeachable offence in the new request is the alleged interference by the president in investigations into the massive Petrobras corruption scandal.\