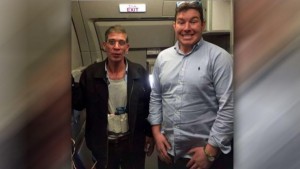 A British passenger whose EgyptAir flight was hijacked by a man wearing what appeared to be a real suicide explosive vest worked up the gumption to take a photograph with his would-be killer. An EgyptAir plane flying from Alexandria to Cairo was hijacked and forced to land in Cyprus on Tuesday but the passengers and crew were freed unharmed and the hijacker, whose motives remained a mystery, was arrested after giving himself up.

Eighty-one people, including 21 foreigners and 15 crew, had been on board the Airbus 320 flight when it took off, Egypt’s Civil Aviation Ministry said in a statement. One of the foreigners, Ben Innes, found humor in the incident, posing for a photograph with the hijacker. Innes appeared to be enjoying himself, bearing a grin as a pair of sunglasses were propped up on his head.

The image of Innes and the hijacker became a worldwide sensation after going viral on Twitter.
“Only Ben could get a selfie!” his sister tweeted, adding the hashtags #proud and #EgyptAir.

Conflicting theories emerged about the hijacker’s motives, with Cypriot officials saying early on the incident did not appear related to terrorism but the Cypriot state broadcaster saying he had demanded the release of women prisoners in Egypt.  After the aircraft landed at Larnaca airport, negotiations began and everyone onboard was freed except three passengers and four crew, Egypt’s Civil Aviation Minister Sherif Fethy said.