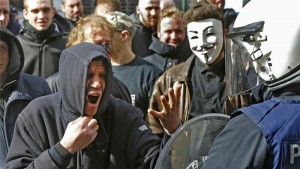 Belgian riot police have clashed with hundreds of protesters at a temporary shrine honouring victims of the Brussels suicide bombings, as investigators launched fresh raids related to the attacks. Brussels police used water cannon when scuffles broke out on Sunday in front of the Bourse, which has become a symbolic rallying point for people to pay their respects to those who died in Tuesday’s attacks.

Black clad men carrying an anti-Islamic State of Iraq and the Levant (ISIL, also known as ISIS) group banner with an expletive on it trampled parts of the shrine, shouting Nazi slogans. Ten were arrested and two police officers injured. “We had 340 hooligans from different football clubs who came to Brussels and we knew for sure that they would create some trouble,” Police Commissioner Christian De Coninck said.

“It was a very difficult police operation because lots of families with kids were here.” Brussels mayor Yvan Mayeur expressed his disgust, with Belgium still in mourning over the suicide bombings at Brussels airport and subway, which killed at least 31 people and injured some 270. “The police were not deployed to protect people from these hooligans but a whole other threat,” said Mayeur told RTL television. People trying to pay their respects were also dismayed.