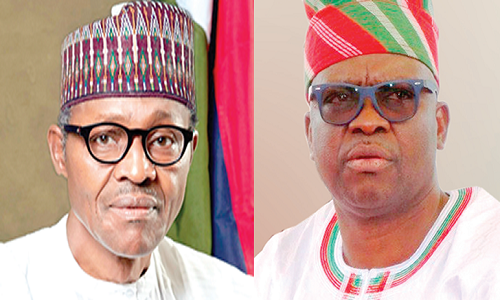 Governor Ayodele Fayose of Ekiti State has urged President Muhammadu Buhari to go beyond apologizing to Nigerians for some of the hardships they are currently passing through by correcting some of the flawed policies and steps his administration has taken in the last 10 months.
The governor also urged Mr. Buhari to stop seeing himself as a sectional leader or president of only the All Progressives Congress but as the leader of all groups and people of the country.
In a statement issued by his Chief Press Secretary, Mr. Idowu Adelusi on Sunday in Ado Ekiti, the state capital, Mr. Fayose, however, commended President Buhari for admitting some errors his government had made.
He further advised the president to be wary of some selfish persons in the APC who were bent on using his name to commit atrocities in the name of politics.
The statement read, “This is a moment of truth. I commend the President for being bold enough to apologise for his lapses. He has come out to admit and accept that criticism is part of democracy. He can do whatever he likes, but it must be within the ambit of the law.
“The President has swallowed his pride by admitting that there is a sharp drop in electricity and that we are experiencing an agonising fuel scarcity in the country. They told us the refineries are working, but that is a lie, we are still importing fuel.
“The President cannot continue to apologise for everything. A leader must think very well before making policy statements”.
The Ekiti governor also called on the president, who doubles as the Minister of Petroleum Resources, to find a permanent solution to the lingering fuel scarcity, address job losses and pay attention to issues of security rather than expending his energy on muzzling opposition in the country.
“Look at the Agatu killings. That place is a food basket for the country and when herdsmen went on the rampage, destroying lives and property, we should not fold arms”, he said.
Fayose also condemned the manner elections were conducted under the present administration, lamenting that the gains recorded in the electoral process under the administration of former President Goodluck Jonathan are gradually been eroded.
“It is an understatement to describe the elections in Kogi, Bayelsa and Rivers states by the Buhari administration as a show of shame. This is an aspect where the President has to be very careful. He must not allow himself to be used by some rejected and crooked politicians”, he stated.