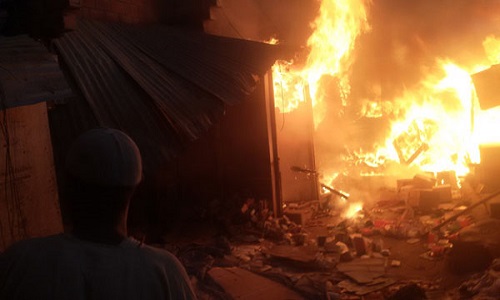 President Muhammadu Buhari has sympathized with victims of the fire incidents in Sabon Gari Market and Birnin Kebbi Central Market in Kano and Kebbi States respectively.
A statement issued in Abuja on Saturday by the Senior Special Assistant on Media and Publicity to the President, Mallam Garba Shehu, said Mr. Buhari commiserated with the government and people of the two states, particularly those who incurred losses in the fire disasters.
The markets were gutted by fire early hours of Saturday with goods and property worth millions of naira destroyed in the inferno.
According to the statement, President Buhari shares in the pain of the victims knowing that the two separate fire incidents had created major setbacks for all those that had business outfits in the markets.
He also noted with sadness that the incidents had also affected the livelihood of the victims’ families and setting back economic activities in the states.
The President, however, advised the governments of Kano and Kebbi states to find out the immediate and remote causes of the fire disasters in the states in order to forestall future occurrences.
Aside investigations, he also called for strict adherence to precautionary standards in buildings and operations in all markets to avoid fire out breaks.
He prayed that the Almighty God would comfort and replenish all those that incurred losses in the incidents.