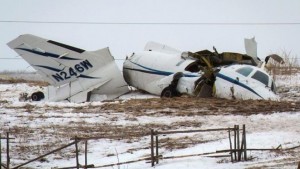 Seven people have died after a small plane crashed on an island off the east coast of Quebec. Authorities said the plane crashed as it approached Iles-de-la-Madeleine Airport amid heavy winds and snow. Jean Lapierre, a broadcaster and former Canadian transport minister, and members of his family were among the victims.

Mr Lapierre, who was 59, worked as a political analyst for CTV and other Canadian media outlets. One of those networks, TVA, said Mr Lapierre’s wife, two brothers and sister died in the crash. They were travelling to the funeral of Mr Lapierre’s father.

He also served as a member of parliament from 1979 to 1993 and again from 2004 to 2007. Former Prime Minister Paul Martin said: “He was a very good political analyst, he was one of the best, but he was also a superb political figure in this country and it was a great privilege to work with him.” Officials with the Transportation Safety Board of Canada travelled to Havre aux Maisons Island in the Magdalen Islands to determine the cause of the crash. The twin-engine turboprop plane had left Montreal’s St Hubert Airport on Tuesday morning.