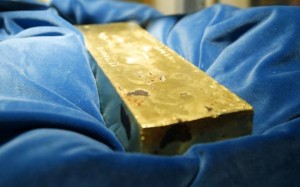 A pair of Canadian plumbers literally struck gold after finding a $50,000 gold brick while renovating a client’s bathroom. Alif Babul and his employee Dean Materi discovered a one-kilogram gold brick while performing a bathroom renovation in Calgary in mid-February. The two plumbers discovered the gold brick underneath a pile of rubble and nearly threw it in the trash before realizing what it was.

“I seen a gold shimmery thing on the ground and I thought it was a cooper light fixture,” Materi told the Calgary Sun. “But when I went to shovel it up, it seemed kind of heavy. I picked it up and it was a gold brick.” They later found that the brick’s value was estimated at nearly $50,000. While both men were initially excited about the potential windfall, they ultimately decided to return the brick to its owners.

“My wife and I had a long chat about that,” Babul told the CBC. “I said to my wife, ‘I don’t know if it’s a good thing or a bad thing, but it’s the right thing to do.” Babul said he has found valuable items while working before, including a collection of rare “Daredevil” comic books, but said his company’s policy at Perfection Plumbing & Gas Ltd. is to turn any items found over to their proper owners. “We always return what we find,” he said.