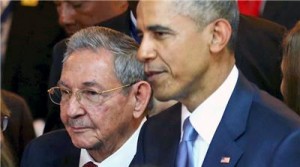 Cuban President Raul Castro and US leader Barack Obama prodded each other over human rights and the longstanding US economic embargo, even as the two men pledged to set aside their decades-long differences and move forward with normalising ties. Following a historic meeting in Havana on Monday, Obama welcomed what he called a “new day” in relations between the two countries, but repeatedly pushed Castro to take steps to address Cuba’s human rights record.

“America believes in democracy. We believe that freedom of speech and freedom of assembly and freedom of religion are not just American values but are universal values,” Obama said, standing alongside Castro after their meeting at Havana’s Palace of the Revolution.

Yet, Castro, who took the rare step of taking questions from journalists, hit back at what he called US “double standards”, saying Cuba found it “inconceivable” for a government to fail to ensure healthcare, education, food and social security for its people – a clear reference to the US.

“We defend human rights,” Castro said. “In our view, civil, political, economic, social and cultural rights are indivisible, interdependent and universal.” When asked about political prisoners in Cuba, Castro pushed back aggressively, saying if the journalist could offer names of anyone improperly imprisoned, “they will be released before tonight ends”. “Give me a list of the political prisoners and I will release them immediately. Just mention the list. What political prisoners?” said Castro.