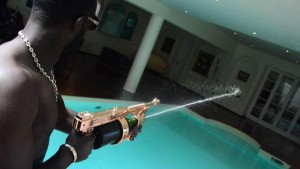 Partying in Miami is all set to reach a whole new level thanks to the Champagne Gun, a French invention that shoots out sprays of bubbly champagne. The $459 device, created by French company Extra-Night, made its American debut in the Cruise Capital of the World earlier this month, and the demand already is off the charts!

Jeremy Touitou, a Miami-based businessman who specializes in nightlife entertainment, is the man responsible for bringing the Champagne Gun to party-goers in the US. Speaking to Vice’s Munchies, he said: “We started to commercialize the Champagne Gun just ten days ago and the response has been insane. We are already almost sold out from the first shipment of around 300 to 400 Champagne Guns.” “Because it’s Miami Music Week, we have all the rappers and musicians having their managers try and get the Champagne Gun to use in their next video or whatever,” he added. “It’s been crazy so far.”

To use the gun, all you need to do is attach a magnum-sized bottle to the holder, shake it a couple of times, and you’re ready to start spraying champagne up to a distance of 23 feet. The fun promo video demonstrates exactly how it’s done – gun-wielding party goers are seen waving the device around wildly and dousing each other in jets of bubbly. Rappers are seen shooting sprays randomly into the air, and also into their own mouths. But you don’t need to be a wasteful person to use the Champagne Gun as the metallic device also comes with a second nozzle attachment to simply pour champagne instead of spraying it.

According to Touitou, the Champagne Gun has received overwhelmingly positive feedback so far, thanks to its multiple uses. “First of all, it’s a beautiful product – for me, I’d call it a piece of art,” he said. “It comes in three different colors and could be just a nice display for a bottle of Champagne. Each gun comes with two nozzles, so you can just use the Champagne Gun to pour champagne in a unique and original way for your guests and clients if you wanted. You can use it as a centrepiece for a bar. Of course, all the big pool parties in Miami and Las Vegas do Champagne showers and the Champagne Gun is a great tool for doing that in style.”