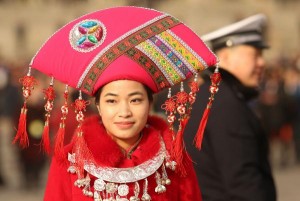 Chinese leaders discussed the economy and the nation’s 13th five-year plan as they gathered for the National People’s Congress on Saturday. Nearly 3,000 delegates came together at the Great Hall of the People in Beijing to discuss China’s poor economic growth and political tension with Taiwan. The annual parliamentary meeting opened with a flag-raising ceremony in Tiananmen Square. Crowds gathered around the area, as the square was closed off to the public.

Prime Minister Li Keqiang told the large crowd China’s economy is “hugely resilient and has enormous potential and ample room for growth. “Domestically, problems and risks that have been building up over the years are becoming more evident,” Li said. “There is no difficulty we cannot get beyond.” He assured the crowd China can reach minimum economic growth of 6.5 to seven percent and sustain a similar rate through 2020, allowing the country to bounce back from cuts made by President Xi Jinping to state-supported industries.

Li’s speech came as many industrial workers fear potential layoffs, with the nation moving away from manufacturing and heavy industry. According to a labor official’s estimate, about 1.8 million steel and coal workers are expected to be laid off. The government plans to set aside $15.3 billion to support the laid-off workers. The plan also calls for China to switch from a business tax to a value-added tax that will charge banks a six percent tax on interest collected from loans.

The president also spoke Saturday, and warned against allowing a repeat of Taiwan secession. “We will resolutely contain ‘Taiwan independence’ secessionist activities in any form,” he said to a group of lawmakers. “Our policy toward Taiwan is clear and consistent, and it will not change along with the change in Taiwan’s political situation.” He also stressed adherence to the 1992 Consensus and it’s basis for peaceful cross-strait relations bye establishing a “one-China” principle that denies separation between China and Taiwan.