Tragedy occurred in Lagos, when a five storey building collapsed in the early hours of Tuesday, at Lekki Garden Estate, within Ikate Elegushi area, along Lekki-Epe Expressway. At least five unidentified dead bodies have been recovered so far from the rubble. 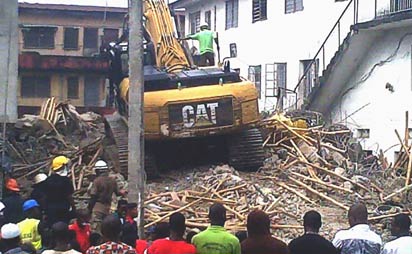 The General Manager of the Lagos State Emergency Management Authority, LASEMA,Mr. Michael Akindele, who  confirmed the report, said six persons have been rescued so far .

It was gathered that the collapsed building was completed less than a year ago. According to Akindele, the incident occurred around 5 am, during the heavy rainfall. “So far, we have recovered five dead bodies and six persons have also been rescued.