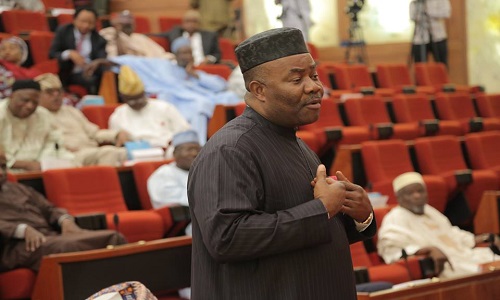 Former Governor of Akwa Ibom State now Senate Minority Leader, Godswill Akpabio, has begged Nigerians to consider the Peoples Democratic Party (PDP) for the Presidency in the 2019 general elections.
Since the return to democratic system of governance in the country over 16 years ago, the PDP controlled power at the centre until it was defeated in the 2015 general elections by the All Progressives Congress, APC.
However, less than one year after majority of Nigerian voters decided to send the party packing from the Aso Rock Presidential Villa in Abuja, Akpabio has made a case for a return of the PDP to the seat of power.
He made the call in a chat with journalists in Abia State after an inter-denominational thanksgiving service in honour of Senator Mao Ohuabunwa for his victory at the Abia North senatorial rerun election.
He said, “As a party, we are happy with the arrangement made so far. Last week, we met with the National Working Committee (NWC) of our party and we agreed that the timetable for the party congress remains sacrosanct. So, the convention will take place on May 21 to elect new leaders for the party.
“I believe it will go in a normal process. We are democrats. I believe strongly there will be no imposition and no impunity. As a party, we show our democratic disposition during the last presidential election. We lost the presidency. We congratulated the winners and we peacefully handed over power.
“Today, other countries are emulating the PDP. We expect the same thing to happen at the various congresses. Let me also use this opportunity to appeal to Nigerians to consider the Peoples Democratic Party for the 2019 presidency”.
Earlier in his speech at the thanksgiving service, Sen. Ohuabunwa said the rerun election was a war between him and a former governor of the state, Dr Orji Uzor Kalu.
Ohuabunwa, who noted that two out of his three challengers had congratulated and agreed to work with him, called on Kalu to put the interest of the senatorial district above personal interest.