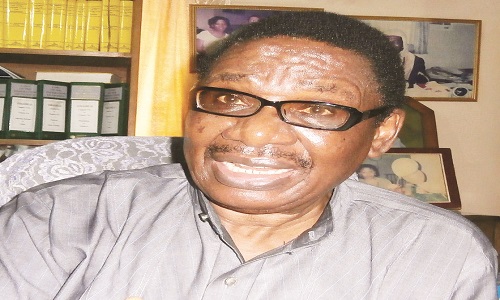 “It is also an obstacle to the eradication of poverty, improved life expectancy and improved livelihood of all Nigerians”.

Sagay said this at the 2nd Public Interest Symposium titled: “How to Fight and Win the War against Corruption; Challenges and Prospects”, at the Island Club, Lagos.

According to him, corruption is the cause of the country`s low human development, as well as responsible for poor policy choices.

He noted that the direct result of this was the execution of white elephant projects, mass unemployment and general misery and wretchedness of the masses.

“Nigeria has been turned into the butt of jokes at the international community, for declaring itself the largest economy in Africa, while harbouring the poorest population in Africa.

“So, we live in this paradox. Nigeria is rich; Nigerians are poor”, Sagay noted.

He said that President Muhammad Buhari had marked a turning point in the fight against corruption, whereas, previous administrations seemed to be have paid lip service to it.

“The eradication of corruption is a major plank in President Buhari`s camp and as soon as he assumed office, he became the indicator for public conduct in the management of our resources.

“Apart from Buhari`s unimpeachable integrity and known intolerance of corruption, which he has demonstrated since 1983, the various Anti-Corruption Agencies that had earlier had gone to sleep, have suddenly ‘roared back’ to life.

“We are presently witnessing the dynamism of the EFCC under a new leadership and that of the Code of Conduct Bureau in recent months. The ICPC is also manifesting some resurgence in its activities”, he said.

“However, there are other anti-corruption bodies like the Nigeria Police Force, the Nigeria Drug Law Enforcement Agency and the Bureau of Public Procurement, who are also engaged in combating corruption”.

He said that the fight against corruption were numerous, however, some of these arise from poor standards of investigation and prosecution.

“The prospect of effectiveness in the prosecution can be improved upon by prosecuting any person or persons who have compromised the process, be it a judge, a prosecutor or an investigator.

“By identifying and selecting judges of the highest integrity, who have passion for justice and can never be compromised by financial blandishments, to form the core of judges”, he said.

Earlier, the Chairman of the occasion, Oladipo Okpeseyi SAN and current Chairman of the Island Club said that they floated the public lecture series in order to identify specific areas of interest in the society needing urgent individual and government attention.

He also noted that maiden edition, which was held in September 2015 had a theme, “Nigeria’s War on Terror: How to Fight and Win”.

The event, which was to start at 1pm on March 16 had to commence later in the day.