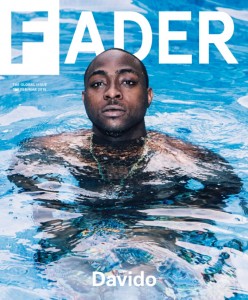 Multiple award winning singer, Davido came under attack on Twitter over his ‘Fader’ cover which many thought was signed by rapper Drake.

Davido‘s ‘Fader’ cover was well placed beside Rihanna’s, and many thought Drake actually signed the cover after the singer shared a photo showing the rapper signing one of the cover on social media.

See what he wrote on Twitter, “Be happy they puttin all magazine covers together .. Fader ain’t put my cover on the African side or something all covers were together. That was my point… No one said shit about gettin nothing signed … A n*gga just happy Africa gettin recognized the same way as err1 else”

Davido also called those all up in his mentions over it, ‘ignorant’.