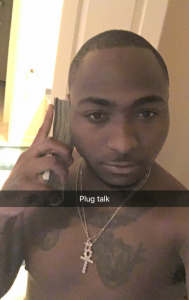 The ever controversial singer, Davido is at it again.

The Omo Baba Olowo went on Snapchat to share a photo of himself posing with his cash.

The singer who signed a million dollar deal with Sony BMG captioned the photo: ‘Plug Talk’.

Davido has been criticized countless times for flaunting cash on social media.