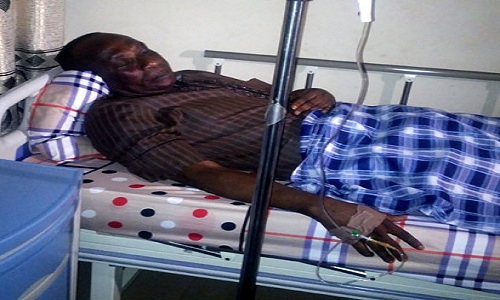 The lawmakers, who described the SSS raid under President Muhammadu Buhari as undemocratic, unpatriotic, dictatorial and brutish, demanded a thorough medical examination of Mr. Akanni.

“We fear that his health and general well-being could have been compromised while in the DSS custody”, they told journalists on Wednesday.

The chairman of the House Committee on Information, Gboyega Aribisogan, who was flanked by the Speaker, Kola Oluwawole, Deputy Speaker; Segun Adewumi, and 16 others, said the SSS must explain to Nigerians whether in a democracy, it was part of the its mandate to disobey court orders and dump Nigerians in detention for 18 days on unfounded allegations.

“Yesterday, we read online like other Nigerians that our member, representing Efon Constituency, Afolabi Akanni, who has been in the Department of State Services (DSS) detention in Abuja since March 4, was on admission at a private hospital in Abuja.

“Up till this moment, we have not been told officially by the DSS whether or not Mr. Akanni was formally released from incarceration after spending 18 days without access to his doctors, lawyers and family members.

“However, preliminary information available to us suggests that Hon Akanni may have been brought to the hospital by men of the DSS and abandoned there because they could no longer hold him in captivity because of his deteriorating health condition.

“Nigerians should be reminded that it took the rumour of Hon Akanni’s death for the DSS to admit officially that it was holding him after spending 15 days in detention without access to anyone.

“As we speak, Hon Akanni is in very critical condition and he has not been able to speak with anyone of us.

“As reported in the media, Hon Akanni could only say that he was sick, he was not well when press men sought to speak with him yesterday.

“We therefore demand an official explanation from the DSS as to why Hon. Akanni was abducted and held incommunicado for 18 days, only for us to be told that he was admitted at a private hospital in Abuja.

“We also demand a thorough medical examination of Hon. Akanni as we fear that his health and general well-being could have been compromised while in the DSS custody.

“Furthermore, we demand an explanation from the DSS whether in a democracy, it is part of its mandate to disobey court orders and dump Nigerians in detention for 18 DAYS on unfounded allegations.

“Most importantly, we condemn strongly the DSS illegal arrest, detention and dehumanisation of Hon Akanni and we demand an unreserved apology forthwith.

“We have also directed our counsel to seek redress and damages in court because to us, this act of impunity by the DSS under President Muhammadu Buhari is undemocratic, unpatriotic, dictatorial and brutish.

“Detaining Nigerians for weeks without trial is a clear return of Decree 2, with which President Buhari hounded Nigerians in detention when he was a military dictator and we in the Ekiti State House of Assembly will continue to support our leader and Governor, Ayodele Fayose, in his fight against tyranny”.