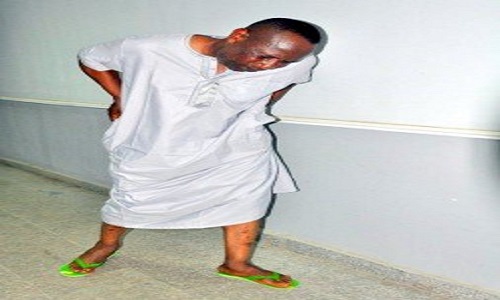 Contrary to the alarm raised by the Ekiti State Government that one of the State House of Assembly members, Afolabi Akanni, who was arrested by the Department of State Services, DSS, had died in custody, the service presented the lawmaker before journalists yesterday at its headquarters in Abuja.

The Commissioner for Information, Youths and Sports Development, Lanre Ogunsuyi, on Thursday addressed a press conference where he alleged that Akanni, who represents Efon-Alaaye State Constituency in the House of Assembly had died in DSS custody owing to neglect.

The commissioner called on the DSS to calm frayed nerves by presenting the lawmaker dead or alive.

It would be recalled that armed operatives of the DSS exactly two weeks ago, stormed the Ekiti House of Assembly complex for yet-to-be disclosed reasons and whisked away four lawmakers, including Akanni.

Presenting the lawmaker to members of the press yesterday in order to dispel rumours of his death, the DSS spokesperson, Abdullahi Garba, said Akanni was being held over weighty but unspecified security issues.

Unofficial sources say the lawmaker may need to answer questions bordering on the originality of the school certificate he used during the election and the death of Modupe Karimu, who was said to be involved in an alleged attempt to impeach the State Governor, Mr. Ayodele Fayose.

Clad in a silver-colored robe and wearing bathroom slippers, the lawmaker, who walked into the venue of the press briefing, was directed to take a back seat but curiously, refused to say much except confirming that he is alive, though sick.

Speaking after much persuasion by reporters, Akanni said: “I slumped yesterday. I’m not dead. I’m alive but I’m sick. I have malaria, I did a test and they gave me a doctor but I don’t know why I am here”.

He also refused to stand up to be paraded before press photographers.

Mr. Garba looked on indifferently as the detained lawmaker rejected entreaties to stand up.

The DSS spokesperson, however told reporters: “You may have been aware of the recent situation in Ekiti State in which the DSS was accused of abducting four lawmakers.

“The fact is that a lawmaker, Afolabi Akanni, was duly invited by the Service over some serious breaches involving state security and for which he has some explanations to make; these breaches fall under the purview of the DSS to investigate.

“This briefing has become necessary in order to debunk a rumour which is being spread in Ekiti State by some mischief makers to the effect that Akanni has died in custody.

“Nigerians and Ekiti people in particular have seen that Afolabi is hale and hearty as he is being presented to the media.

“The DSS, therefore, warns all those who have planned to make a meat out of this to desist from it and steer clear from trouble as the Service will not hesitate to prosecute anyone or persons who may engage in violent actions of any kind.

“In a similar vein, all law-abiding Ekiti residents should go about their businesses as the Service assures them of full protection by security agencies”, Garba stated.

Answering reporters’ questions, Garba said he was not in a position to say anything about when Akanni would be taken to court, adding that investigations are still going on.