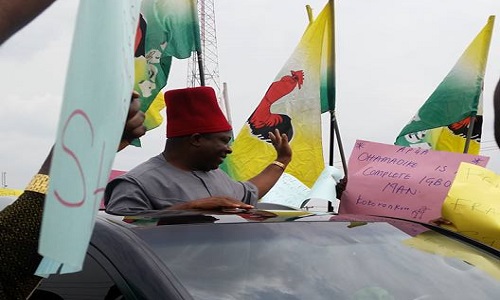 Umeh was arrested on Thursday at his Aguluzigbo country home in Anambra State and later whisked to Abuja for questioning on his alleged sponsorship of the pro-Biafra group, Indigenous People of Biafra (IPOB).

His release from DSS custody barely 24 hours after he was picked up by Nigeria’s secret police, came on the heels of allegations by his party, APGA, that the arrest was politically motivated.

APGA Deputy National Secretary, Chief Jerry Obasi, who made the party’s position known in a statement yesterday, accused Umeh’s opponents in the forthcoming Anambra Central Senatorial re-run election, of which he is a front-runner, of being behind the arrest in a bid to prevent his impending electoral victory.

While describing the arrest as obnoxious and despicable, Obasi expressed regret that the DSS has become a willing tool in the hands of political desperadoes aiming to intimidate their political opponents.

The APGA deputy scribe, therefore, warned the DSS to release Umeh immediately in the interest of peace.