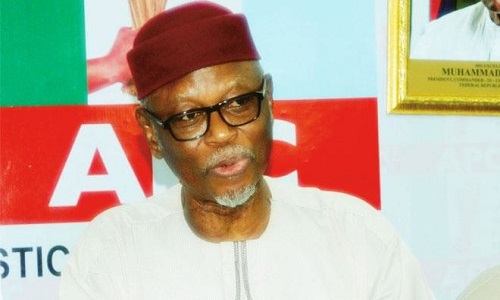 The national leadership of the governing All Progressives Congress, APC, has felicitated with Nigerians on the Easter celebrations.
In an Easter message by its National Chairman, John Odigie-Oyegun, the APC urged Nigerians to imbibe the humility, tolerance, selflessness and sacrifice embodied by Jesus Christ when he gave his life to save mankind.‎
The APC National Chairman also urged the Christian community, especially religious leaders, to always promote religious harmony among various religious groups.‎
‎
‎He assured that the APC-led administration of President Muhammed Buhari is committed to delivering ‎on the change agenda promised Nigerians‎.
“The 2016 National Budget recently passed by the National Assembly provides ample framework to deliver on these promises”, he said.‎
‎
Mr. Odigie-Oyegun called for greater international cooperation to effectively combat global terrorism.
‎
“In the wake of the recent gruesome March 22 Zaventem Airport and Maalbeek Metro Station terror attacks in the Belgian capital, Brussels and the March 25 stadium suicide attack in the Iraqi capital, Baghdad, the need for greater international cooperation in the fight against global terrorism is reinforced.
‎
“No country is insulated from the global terrorism threat. Our best chance is to come together as a unified front to defeat this global threat.‎
‎
“I call on all Nigerians irrespective of religious, ethnic and political affiliation to support government in the fight against violent extremism, abductions, mass killings, politically-motivated killings and other criminal activities. Also, the public should remain vigilant and cooperate with security agencies in the fight against all criminal activities.
‎
“While we salute and pray for our‎ armed forces, police and other security agencies fighting to restore peace and normalcy in Nigeria’s North East, let us be rest assured that the end to the Boko Haram-led insurgency and other forms of terrorism by the extremist sect is near”, he said.