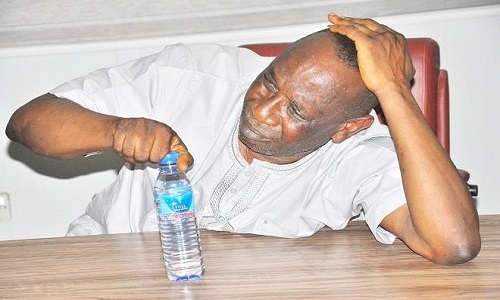 The Ekiti State chapter of Peoples Democratic Party, PDP, has accused the All Progressives Congress-led Federal Government of plotting to kill a member of the State House of Assembly, Afolabi Akanni, while in the custody of the Department of State Services.
Mr. Akanni, the member representing Efon-Alaaye state constituency, has been in custody of the DSS since March 4, over unspecified weighty “security” issues.
Reacting to the lawmaker’s detention in a statement signed by its Publicity Secretary, Jackson Adebayo, on Sunday in Ado-Ekiti, the PDP said that by not releasing Mr. Akanni from detention despite his failing health, there was a deliberate attempt to kill him.
The party further stated that the refusal of the federal government to release him in the face of his health and despite the state government’s outcry against the violation of his human rights, there was reason to believe that the aim of his arrest was to ensure he died in detention.
Mr. Adebayo noted that the APC-led federal government had exposed itself to ridicule by not disclosing the reason for the lawmaker’s arrest, while citing security breach, which was unknown to anybody.
“The DSS itself failed to explain what the breach was, whether it was something in the make of the Boko Haram insurgency in some parts of the country or the agitation by Biafran people”, the party said.
“The DSS or any other agent of the government owed a lot of explanations on the matter because the arrest of Akanni and his continued detention despite his failing health is wicked.
“Then we want to ask when and where did he commit the security breach and of what injury does it have on the nation that the Federal Government should arrest and detain him without trial for several weeks and many other questions are crying for urgent and accurate answers”.
The PDP, therefore, urged the federal government to charge the lawmaker to court if it seeks to be responsible.