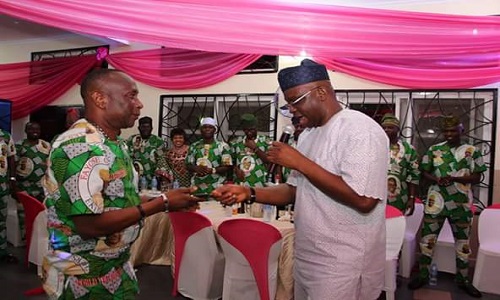 Governor Ayodele Fayose of Ekiti State yesterday at a reception in honour of members of the state House of Assembly, rewarded the lawmaker representing Efon Constituency, Afolabi Akanni, with a car gift for his loyalty.
Akanni was detained for about 18 days by the Department of State Services (DSS) for reasons unconnected with the purported plot to sack the governor from office using the state legislature.
The lawmaker, who arrived in the state on Thursday to a warm reception, vowed not to betray Mr. Fayose for any reason after he was handed the keys to the car.
“I can authoritatively say that the governor is a great leader and a great mentor. He remains a very honest man who also stands by his followers. I was so sure that he will fight my cause while in detention and I was not disappointed”, Akanni said.
“The DSS asked me so many questions about the governor and I stood my ground. Governor Fayose is one man that I can never betray because he is my helper and my mentor. He has done a lot for me.
“I advise all of us to stand solidly behind this man. Any attempt to betray him will lead to your own downfall. I must say that the DSS is bent on destroying this democracy”, he added.
While handing over the car key to the lawmaker, Governor Fayose said that the DSS only succeeded in tarnishing its own image by attempting to allegedly coerce members of the state’s Assembly to act the script of his detractors, which is to impeach him. 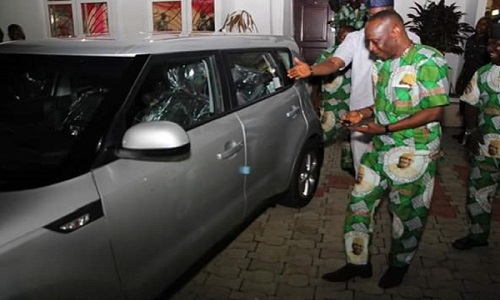 Fayose, who received the lawmakers at the Jibowu Hall of the Government House, said “this House of Assembly is very unique and exemplary. You have refused to be bought over.
“My detractors have money and influence, but the power of God starts where that of men stops. I’m so proud of you. You have shown that you can see beyond today”.
According to him, “wealth is not the amount of money in your bank account, but your level of integrity. You represent and carry yourselves as responsible Nigerians. The old testament has to give way to the new testament. You are the ‘new testament’ House of Assembly.
“Betrayers will only contribute to the success of the person being betrayed. Those that betrayed us in the first term are no longer relevant today. Many of them even suffered and regretted their actions.
“Together we stand and I know the House will never divide. I don’t regret standing for those incarcerated. This is an opportunity for us to stand for our tomorrow.
“The DG of SSS, Daura only succeeded in tarnishing the image of the security outfit. We must be courageous and fearless like the book of Joshua admonishes us. Persecution and oppression will only make us better.
“My detention in Ikoyi prison made me a better man. It made me to reflect on so many things. It is my duty to reward loyalty and forthrightness and I’ll not stop doing it”.