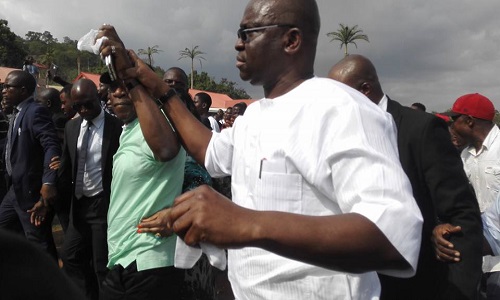 It was a heroic welcome yesterday for the member of the Ekiti State House of Assembly representing Efon State Constituency, Afolabi Akanni, as a mammoth crowd of supporters thronged Fajuyi Park in Ado-Ekiti, the State capital, to catch a glimpse of the man who was thrown into the “Lion’s den”, yet emerged alive.
Hon. Akanni was arrested by the Department of State Services on March 4 for undisclosed security reasons and whisked to Abuja where he was allegedly kept incommunicado from his family, lawyers, colleagues and doctor, even when he took ill and could barely walk.
In apparent fear that the lawmaker could die in its custody if he did not receive prompt medical attention, the DSS on Tuesday reportedly dumped him at a private hospital in Abuja, where he was admitted.
In recognition of his unflinching loyalty to Governor Ayodele Fayose, the Ekiti State Government organized a reception for the released lawmaker on Thursday after 18 days in DSS custody.
Governor Fayose and Hon. Akanni arrived Christ’s School field in a chartered helicopter accompanied by a former Special Adviser on Revenue Matters, Ropo Ogunjobi, who was also grilled by the DSS.
Government officials, party leaders and members had been mobilised to the venue as early as 9am.
They were welcomed amidst singing, dancing, drumming and trumpeting, despite the unbearable heat.
The atmosphere soon became charged as Fayose used the opportunity to lampoon President Muhammadu Buhari and former President Olusegun Obasanjo.
Akanni said his ordeal in the hands of the DSS had inspired him to be loyal to Fayose.
He also claimed that his detention was politically motivated and an attempt to get at the governor, who he described as a “reliable leader”.
The lawmaker said: “What manner of democracy are we practising? How can DSS invade a House of Assembly and arrest a lawmaker with intention to impeach a governor?
“They even came without a warrant of arrest. Is this democracy?
“Is it an offence to be loyal or committed to a governor? Fayose is our leader and I can’t betray him.
“Ekiti people must stand behind him. Mr Governor, I am assuring you that I will always stand by you”.
In his remarks, Ogunjobi said he was quizzed on the alleged laundering of N22 billion refund on federal roads, allegedly paid into Fayose’s accounts, which he described as “blatant falsehood”.
He said: “They even said I helped Fayose to launder N1.3 billion out of the N2.5 billion ecological fund released to the state.
“I said all these were lies. I can’t lie against Mr Governor”.
Fayose, who said he has won another battle against “federal forces”, declared that the alleged attempt to unseat him won’t work like that of 2006.
He described Akanni as a hero.
The governor said: “President Buhari and former President Obasanjo are not democrats.
“They have no respect for the constitution and the rule of law. But no matter what they do, we won’t succumb to intimidation.
“Today, I am excited because we have won the battle again. They took Akanni to Abuja as a captive, but he is back as a hero. Shame unto DSS. Shame unto our oppressors.
“Our economy is bad. People are losing their jobs daily. The All Progressives Congress (APC) has no answer to this bad economic situation.
“When the Peoples Democratic Party (PDP) was in power, a dollar was N200, but today it is almost N400.
“We thank God that we have a House of Assembly that refused to join forces with them. That was why I told them that they had engaged a wrong customer.
“They should forget about impeachment, because this is not 2006.
“President Buhari should face Nigeria’s financial problems”.