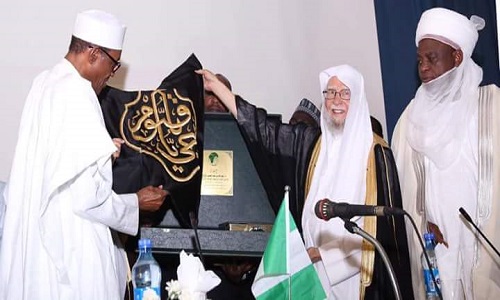 President Muhammadu Buhari Thursday said a sociological study would be conducted on Boko Haram when they are finally subdued by the government.

The president said such a study will assist in determining the origin, the remote and immediate causes of the movement, its sponsors, its international connections and steps to prevent its recurrence.

Since launching a bloody campaign against the Nigerian state in 2009, Boko Haram has killed over 12,000 people, displaced millions in the Northeast, destroyed livelihoods and property worth several billions of naira and gained notoriety as the world’s deadliest terrorist organization, ahead of the Islamic State (IS).

Buhari, who spoke at the opening ceremony of the International Islamic Conference on peace and nation building in Abuja, noted that the theme and timing of the conference, which is a joint effort between Jama’atu Izalatil Bid’a Wa Iqamatis Sunna based in Nigeria and the Muslim World League, is coming when most parts of the world are grappling with one form of violent conflict or another.

He welcomed the Executive Secretary of the Muslim World League, His Eminence, Professor Abdullahi bin Abdulmohsin Al- Turki to Nigeria.

He said: “I assured Nigerians that at the end of the hostilities when the group is subdued, the Government would commission a sociological study to determine the origin, the remote and immediate causes of the movement, its sponsors, its international connections if any, to ensure that measures are taken to prevent a recurrence.

“The outcome of the proceedings of this conference will be useful in that regard”, he added.

Buhari reiterated that Boko Haram is a mindless, godless group who are as far away from Islam.

He said also that he was impressed by the objectives of the conference, which are among others, to: *promote national, regional and global cooperation against the spread of insurgency;
*correct the distortions about the concept of peace in Islamic ideology and philosophy;
*contribute to the global fight against terrorism because security is a shared responsibility; and to
*attract global attention to the plight of those most affected by the insurgency, which is mostly concentrated in the North Eastern part of our country. These include Internally Displaced Persons (IDPs), orphaned children, widows and the elderly who have been rendered homeless and helpless as a result of the insurgency.

The president told the gathering that Nigeria’s joint cooperation with its neighbours has substantially degraded the attacking capability of Boko Haram and have compelled them to retreat.

“We will pursue them relentlessly until they become an item of history”, he added Speaking further, Buhari said: “The tragic paradox of the global insurgency situation is that most of the atrocities committed by various insurgents all over the world today are being carried out mainly by people who pretend to be Muslims, yet most of the victims and casualties are equally Muslims.

“To underscore their cruelty and godlessness, they particularly target the most vulnerable members of the society: children, women and the elderly. No religion approves of such heinous crimes against humanity; definitely not Islam nor Christianity, to which two most Nigerians belong”, he added.

Noting that normal people must rise up against terrorism, Buhari said that Islam does not permit lawlessness as it frowns at extremism even in normal acts of worship.

He added: “The emergence of any group advocating the contrary is, therefore, irreligious and unacceptable. Religious leaders must intensify their efforts to send out the real teachings of their religion in order to counter the diabolical ideology that motivates the insurgent elements”.

President Buhari also urged the forum to call on all religious, community and political leaders to mobilise their followers against corruption and crimes of any kind, lamenting that Nigeria had suffered many years of official neglect and corruption, which in turn led to untold hardship to the common man.

“They should also encourage them to be more tolerant of each other; and recognise the rights of others as they want others to recognise their rights to worship and live freely”, he added.

Buhari promised that his administration will do everything possible to safeguard lives and property and also to ensure even development across Nigeria.

The president also pointed out that the global economic challenges facing the world today might turn out to be a blessing for Nigeria as it will stimulate the latent economic opportunities that have remained untapped for decades in the country.

According to him, poverty breeds disaffection, which in turn leads to crime and lawlessness, including confrontation against the State.

“To checkmate this, we must work hard to lift our economy, engage our youth and rebuild infrastructure. We can only achieve these with full cooperation of all Nigerians and under a stable polity. We are determined to do this and we shall not be deterred”, Buhari said.

The Senate President, Bukola Saraki; Sultan of Sokoto, Alhaji Sa’ad Abubakar; Emir of Kano, Muhammadu Sanusi; governors and other leaders were at the occasion.