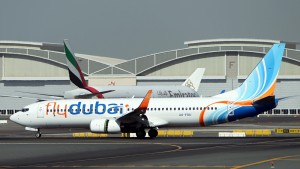 At least 62 passengers and crew have died after a FlyDubai plane crashed during an attempted landing in the Russian city of Rostov-on-Don, Russian officials said. A Russian investigative committee confirmed in a statement that all the people on board the plane, travelling from Dubai, were killed in the crash on Saturday morning.

“The aircraft hit the ground and broke into pieces,” the committee said on its website. “According to preliminary data, there were 55 passengers aboard and seven crew members. They all died.” In a statement published on Twitter, the Dubai Media Office said 44 of the passengers were Russian, eight were Ukrainian, two were Indian and one was from Uzbekistan.

The plane was believed to be a Boeing 737 operated by Emirati airline FlyDubai, a budget airline with a new fleet of planes that started flying in mid-2009.  Russia’s state-run RT network tweeted a clip of what appeared to be a large explosion. In a statement, Ghaith Al Ghaith, chief executive of FlyDubai, said, “We offer our deepest condolences to the families of the passengers and crew.

“Everyone at FlyDubai is in deep shock and our hearts go out to the families and friends of those involved. We don’t yet know all the details of the accident but we are working closely with the authorities to establish the cause. We are making every effort to care for those affected and will provide assistance to the loved ones of those on board.”