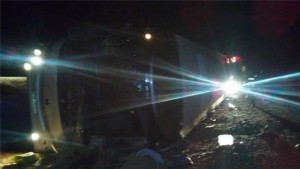 At least 14 Palestinians have died and 36 were injured in a bus crash in southern Jordan, local media and medics reported, citing security officials. Petra news agency said the death toll of the accident, which occurred near the Mudawara border crossing to Saudi Arabia late on Wednesday, was likely to rise.

Some of the injured were in critical condition, Jordan’s Civil Defence Department (CDD) said. The driver of the bus may have lost control, the CDD said, after which the bus overturned.  It added that the passengers were headed to Mecca to perform the Umra rituals.

The injured, whose condition ranged from medium to critical, were transferred to two public hospitals, CDD said. Palestinian pilgrims from the occupied-West Bank usually travel to Saudi Arabia by land through Jordan in an over 1,200km trip.