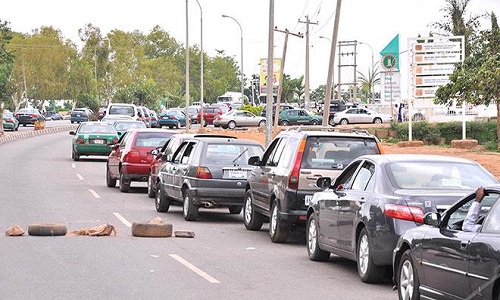 The National Union of Petroleum and Natural Gas Workers (NUPENG) on Wednesday assured that normalcy would soon return to filling stations nationwide if the current tempo of loading at the depots continued till the weekend.
Alhaji Tokunbo Korodo, the South-West Chairman of the union, gave the assurance in an interview with the News Agency of Nigeria (NAN) in Lagos.
Korodo said that the NNPC commenced massive pumping of petrol to its depot at Mosinmi early this week and loading of petroleum trucks had started.
“Going round some depots in Lagos, I observed that loading was going on and more filling stations are selling the product at the control price.
“Some filling stations that are selling between N130 and N150 will be forced to sell at control price when the market is flooded with petrol.
“If NNPC can keep the tempo of the loading till weekend, more filling stations will have petrol and the queue of motorists at filling stations will reduce.
“The corporation should ensure that it keeps on pumping petrol to both major and independent marketers’ depots to reduce the scarcity”, he said.
The chairman appealed to NNPC management to ensure that it carried along all stakeholders in the oil and gas sector so that the fuel scarcity could end as promised.
Korodo urged the corporation to maintain the current loading system at depots.
NAN reports that the Minister of State for Petroleum, Dr Ibe Kachikwu, on March 29, said that the long queues in the petrol stations would disappear by April 7.
Kachikwu made the statement when he appeared before the Senate Committee on Petroleum (Downstream) over the lingering fuel scarcity in the country.
He apologised to Nigerians over his statement that the fuel scarcity would linger till May.