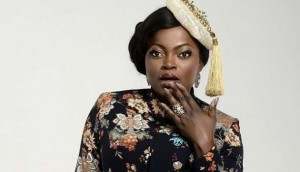 Famous comic actress, Funke Akindele has shared a new cozy photo of herself and fiancé, JJC Skillz, cuddled up in bed via her snapchat account.

The new couple got engaged only recently have they struggled to keep their love life away from prying eyes but now seem to be slipping, as this new photo proves.

Akindele, 39, shared the cute snap, with the caption, “Back to bed with my boo.”

The Award winning actress and Skillz, had earlier been spotted, piling on the PDA at the recently held Africa Magic Viewers Choice Awards which held on March 5, 2016.

The couple who are so obviously smitten with each other are reported to be planning a surprise wedding, while they base in London in a bid to keep their relationship under wraps.

Akindele had separated from her former husband, Kehinde Almaroof in 2013, and seems to be soaking up all this love this new relationship is offering.

Meanwhile, Skillz 38, who has never been married, has fathered 3 children aged 18, 15 and 10 from three different women.