A 32-year-old man identified as Ikechukwu Anigbo, a barber, was reportedly killed and burnt around a popular relaxation centre at the old London Lane, in Apo, Abuja at the weekend, after he was allegedly mistaken for a robber. 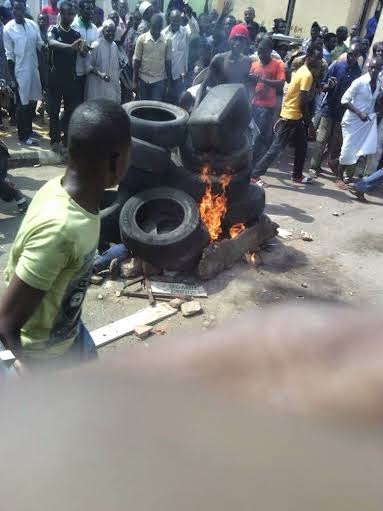 Daily Trust reports that the deceased’s friend, one Chukwudi Orji had visited his barbing salon on Saturday. However, about 30 minutes after he left, Orji was said to have received news of violence involving some motorcyclists and at about 11p.m, he learnt that his friend, Anigbo was the victim of the violence.

According to Orji, “I saw the fire, but I did not know that someone was inside. There was smoke everywhere; there was no way you would have known that there was someone in the fire, except you were there or somebody told you about it,” he said.
Reports have it that a quarrel had ensued between the deceased who hails from Aku in Enugu State and a motorcyclist over N10 “change,” he was supposed to have collected after paying his fare.

It was alleged that during the argument, the motorcyclist attracted his colleagues to the scene by shouting “thief”.

According to the taskforce chairman of Abuja Spare Parts Dealers Association, Apo, Mr. Ezema Virginus Chukwudike, “The mob that gathered following the alarm collected tyres from a vulcanising workshop near the scene and set the deceased on fire.”

The taskforce chairman reportedly lamented the excesses of motorcyclists in satellite towns within the territory and the need to be curbed.
“When news of the incident spread, people became angry. They wondered why the motorcyclists would burn an innocent man. Even the man who volunteered to carry the corpse after he had been killed, was chased away.

“This is not the first time that motorcyclists are killing someone over a paltry sum of money.

“A similar thing happened in Kabusa, when a boy was stabbed because of change. Another man was killed on Wumba road. The same change issue led to the death of a man in Damagaza. In his case, after he was killed, they kept him near a river until the next day,” Chukwudike was quoted to have said.

“The last time such an incident occurred in the area, the traders protested and it took the intervention of policemen to bring the situation under control,” he added.

He noted that the matter was reported at the Apo Police Station.

When contacted, the spokesperson of the FCT police command, ASP Anjuguri Manzah said, “There was a disagreement last night between two opposing groups and we are in the know.”

Manzah said there are several versions of the incident. While some insist that the late Anigbo did not commit any crime, some alleged that he attempted to snatch the motorcycle but was overpowered by the motorcyclists.

However, “A thorough investigation is ongoing to give a clearer picture of what actually transpired,” he said.

The taskforce chairman, speaking further, said government should stop motorcyclists from arming themselves with daggers.

“Why should government allow them to move around with daggers unchallenged?” he asked.