A suspected thief, Babatunde Ibrahim, who allegedly specialises in stealing phones, says he derives pleasure in the act.

The 28-year-old suspect told the police that he had been stealing since his childhood, confessing that he had stolen over 100 phones.

Ibrahim was arrested on Sunday by operatives of Rapid Response Squad, Lagos State Police Command, at the Ikeja Along end of the Lagos-Abeokuta Expressway while he was returning from a burglary in the Ilupeju area of the state.

The suspect told the police that he had entered the building through the balcony door which was left ajar, and stole three phones and other valuables.

Ibrahim said he usually sold the stolen items to Sanni Azeez and Hakeem Kamoru, adding that his targets were mainly motorists trapped in gridlock.

He said, “The act of stealing has become part of me. I am a specialist in burgling people’s houses. I used to gain entrance into any house by breaking the door or cutting window net with a razor blade. I derive pleasure in taking what does not belong to me.” 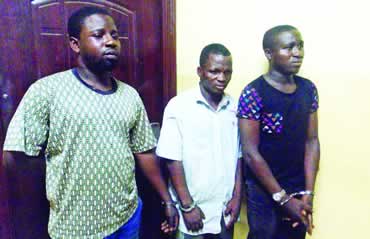 “Apart from burglary, I also operate during traffic jams, especially on Ikorodu Road, Lagos-Abeokuta Expressway and Apapa-Oshodi Expressway. The last operation I went for was at Ilupeju where luck ran out on me. I stole two Nokia phones, one BlackBerry and other valuables. The receivers of the phones I stole are Sanni (Azeez) and Hakeem (Kamoru). They live on Akala Street, Mushin.”

Our correspondent learnt that Ibrahim’s confession, led to the arrest of the two accomplices.

The RRS, Commander, Olatunji Disu, said his men gave Ibrahim a chase after noticing that his movement was suspicious, adding that he was arrested when he could not give satisfactory answers to questions they asked him.

He said, “We noticed his suspicious movement. He wanted to drop his bag in one corner, but when he found out that we had seen him, he bolted. But we gave him a chase and caught up with him. We conducted a thorough check on his bag where we recovered the stolen items.”

The Lagos State Police Public Relations Officer, SP Dolapo Badmos, said the suspect would be charged to court after the conclusion of investigation.

She said, “The three suspects have been transferred to the Ilupeju Police Station. They will be charged to court.”