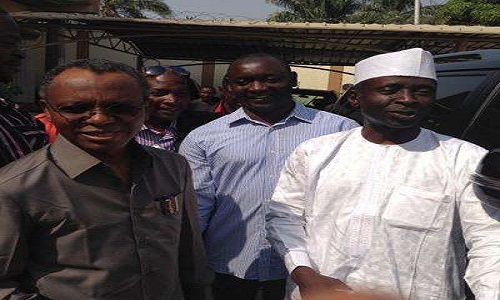 Governor of Kaduna State, Malam Nasir El-Rufai has debunked rumors making the rounds that he allegedly slapped his Deputy, Barnabas Bala Bantex, which resulted in a physical confrontation between them.
The rumor mill last week was agog with reports that the governor and his deputy, who is from the Southern part of the state, had been having a cold war over alleged plans by Mr. El-Rufai to sack top civil servants in the state.
Mr. Bantex had reportedly disagreed with the governor over the move because according to the reports, he would be “stoned” by his kinsmen because most of those to be affected are from Southern Kaduna.
However, speaking at an interactive session with journalists on Tuesday night, El-Rufai dismissed the rumor, saying those behind it are “Not quite intelligent enough”.
He said if the alleged fisticuffs took place in the executive meeting as portrayed by the rumour mongers, there would have been video evidence of the fight by some executive members of the State councils, “because nobody is prevented from entering the meeting with his or her phone”.
He said if there is anybody he so much trusted and respected, it is Bantex, who he said he had known closely for the past 40 years at Ahmadu Bello University, Zaria.
The governor further explained that it was based on the trust he has for his deputy that whenever he travelled out of the country, he usually allowed him the rights of an acting governor.
This rights of acting governor, El-Rufai noted, was never observed by past governors, adding that as acting governor, Bantex signed documents and chaired security and executive council meetings.
“We chair executive council meeting together, we operate like partners, and now people want to create enmity between us. I am of age, I can’t descend so low. This rumour is completely false, it is created to cause division.
“We never discussed retrenchment of workers in the State as claimed by the rumour mongers.
“I have never slapped anyone in my life, I have never argued with Bantex, I don’t slap people, I fight people with mouth”, El-Rufai stated.