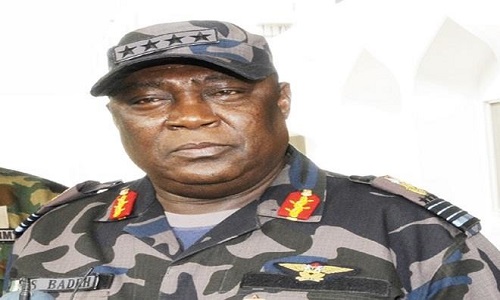 Former Chief of Defence Staff, Alex Badeh, has denied allegations by the Economic and Financial Crimes Commission, EFCC, that he was involved in diverting money meant for purchase of arms for the Nigerian military, describing his current detention by the EFCC as “persecution”.

Badeh, a retired Air Chief Marshal, who has been in EFCC custody since February 8, said in a statement Thursday that he was being subjected to “media trial” for no just cause.

The former defence chief lamented that despite his repeated assurances to the anti-graft agency that he would fully cooperate with any investigations, he was being unfairly treated and his rights violated by a country he stressed he fought so hard to defend against Boko Haram Terrorists.

We had earlier reported here that Badeh’s arraignment before a federal high court in Abuja was stalled on Thursday due to the absence of the judge.

It has been widely reported in the news that I am being investigated over the $2.1 Billion Arms deal but that is not true. I was not part of Dasuki gate.

The claim that 5 properties were acquired for me from the $2.1billion funds is also false.

I was Chief of Air staff from Oct 2012 to January 2014 and then appointed CDS. During my time serving as the CDS, funds for weapons were directly released to the Chief of Air staff, army staff and naval staff and not to me. I had no control over the funds and yet I am being accused of embezzling weapons funds.

The office of the CDS had no operational control of the services and had nothing to do with their spending.

The EFCC’s claim that I received $800,000 from my Director of Finance and accounts is untrue. I did not receive such money from the erstwhile DFA. If he claims to have given me money, where is the proof? Was it paid into my account? Did I sign for it?

It is unfortunate that the media has unwittingly allowed itself to be used by interested parties to become judge jury and executioner in my case.

Even when they claimed Billions were found in accounts of wives of some past Air Force officers, none was found with my family yet EFCC keeps generalizing and making it look like my family is involved too.

It is rather unfortunate that the nation which I fought so hard within my means to defend against Boko Haram insurgents cannot guarantee my fundamental human rights.

During my time as the CDS, lives of both soldiers and civilians were lost. Territories were lost. We fought to regain our nation’s territorial integrity and the insurgents pushed back.

I LOST MY PERSONAL HOUSE AND HOSPITAL IN DEFENCE OF MY FATHERLAND (A hospital which I built many years ago and was equally used in the treatment of injured soldiers). NOW I AM LOSING MY FREEDOM TO THE SAME FATHERLAND THAT I FOUGHT SO HARD TO DEFEND

During the 2014 Boko haram attack on my village Vimtim, it was widely reported in the media that I sent a helicopter to evacuate my parents and relatives. Which parents? I am an orphan, I lost my father in the 70’s and my mother in 2013. My cousin, who lived next to me, was killed during the 2014 attack on my village. So who exactly did I evacuate? It is unfortunate that I didn’t come out to clarify some of these issues when they were reported in the media.

I was detained by The EFCC for 3 weeks and was not charged to court but was given onerous bail conditions by the Commission which I could not meet. A remand warrant was hastily obtained on the 25th February in Lagos as soon as The EFCC was served with a notice for my bail hearing in court by my lawyers. Why detain me for so long and issue such onerous bail conditions when they aren’t ready to charge me to court?

I reported to the EFCC when I was invited and would report anytime I am needed. All I ask for is to be given a fair hearing with the rule of law strictly adhered to.

It is a media trial and I am being persecuted.