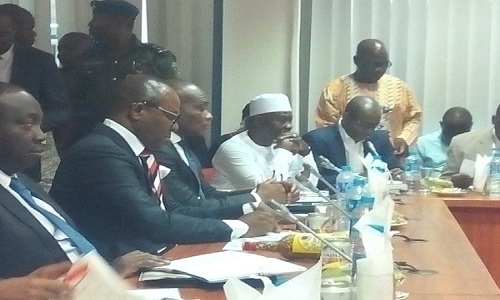 The embattled Minister of State for Petroleum, Ibe Kachikwu, has stood up to those calling for his resignation, saying he still had a lot of work to do, hence, he won’t heed their call to throw in the towel.
He spoke on Tuesday in Abuja while briefing the Senate Committee on Petroleum (Upstream) on the lingering scarcity of petroleum products across the country.
Following the current fuel scarcity, Mr. Kachikwu had said he is not a magician and urged Nigerians to endure the hardships until May.
His comment elicited condemnations from a national leader of the All Progressives Congress, APC, Asiwaju Bola Ahmed Tinubu, who described the comment as a crude joke. Some groups, including the South South APC, National Association of Nigerian Students, NANS, and some Civil Society Organisations, CSOs, however, were less charitable as they called for the minister’s resignation.
In his response to the calls, which formed part of his closing remarks at the Senate briefing, Kachikwu, who earlier apologized for the comment and promised that the long queues at the petrol stations across the country will gradually disappear from 6 or 7 of April, advised “All those planning to come to Abuja for a protest should save their fuel, I am not going to resign, I have a lot of work to do”.
According to the minister, he did not accept to be minister of petroleum in order to create scarcity.
He also assured that he would work hard to proffer lasting solutions to the problems in the industry.
Mr. Kachikwu said he was pained as much as many Nigerians that the country still suffered petroleum scarcity in spite of being one of the largest producers of crude oil in the world.