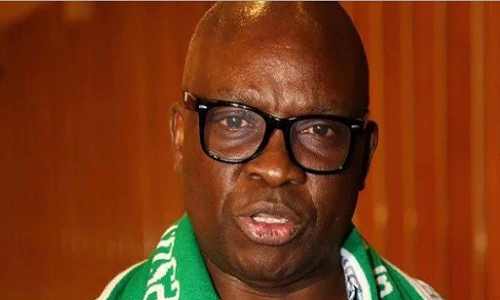 Governor Ayodele Fayose of Ekiti State has dared President Muhammadu Buhari to declare a state of emergency in the state if he can.
Fayose was addressing State House correspondents on Monday shortly after stepping out of the ongoing National Economic Council (NEC) retreat earlier declared open by the president.
According to the governor, plans to declare emergency rule in the state was being mooted, but that it would not work.
It would be recalled that in his first tenure as governor, Fayose was impeached by the House of Assembly allegedly on the orders of then President Olusegun Obasanjo in 2006 but following a “constitutional crisis”, the president declared a state of emergency and appointed Brig.-Gen. Tunji Olurin (retd.) as sole administrator of the state for six months.
Fielding a question on the possible declaration of a state of emergency in Rivers following the violence that marred Saturday’s legislative elections there, Fayose said: “They’ve been insinuating that too in Ekiti. We’ve been waiting for them. Power has gone beyond the leaders, power has gone back to the people.

“There (are) certain things leaders will do today, you will hate it tomorrow. You want to declare state of emergency, declare it and we will tell you that the state of emergency will not work too. This country belongs to all of us”.

The governor also condemned what he called “the militarisation” of the re-run elections in Rivers State.

He said: “If in Ekiti election, nobody was slapped, nobody died, the person defeated congratulated the winner; do we now call this Rivers election rivers of bloodgate? Because, for a peaceful election in Ekiti and this in Rivers, the military has got no business in our elections.

“PDP has always won all the elections after annulment; which means what happened in Rivers is just a service of ego of some individuals who believe they have Nigeria in their pockets. They can call the president at will to deploy the military, and it’s unfortunate that somebody would allow the military to kill his own people. I strongly condemn the elections in Rivers and charge that we sustain the legacy of transparent elections. For me in Ekiti, we learnt from that and we’re prepared. We prepare for election everyday and we’re fully prepared”.

The governor also accused the federal government of allowing the Economic and Financial Crimes Commission, EFCC, to detain “innocent” Nigerians in the name of fighting corruption.