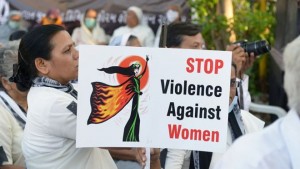 Three men have been arrested after a woman jumped from a two-storey house in the eastern Indian city of Kolkata (Calcutta) to escape rape, police said. The woman attended a party at the house, where the three men allegedly attempted to rape her after spiking her drink, reports said.

She was rescued by neighbours after jumping, and is recovering from a head injury in hospital. Police told BBC Hindi that one of the men arrested was the woman’s boyfriend. The woman had not yet registered a complaint, police said. Indian media reported that the men had been charged with molestation and would be produced in courts later on Monday.

The issue of sexual assault has been high on the agenda in India since a 23-year-old student was gang-raped and murdered on a bus in Delhi in December 2012. The case prompted global outrage and a tightening of India’s laws on sexual violence. But correspondents say tougher laws have failed to bring down the number of rape cases and a series of high-profile crimes have taken place since then.