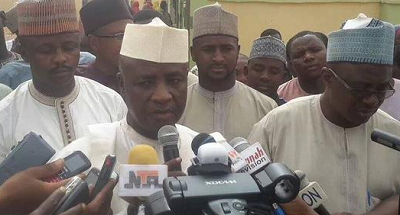 Sen. Aliyu Wamakko (APC-Sokoto State) said the introduction of the card reader in the electoral process was an indication of the maturity of Nigeria’s democracy.
He told newsmen in Wamakko, Sokoto state, shortly after voting in Saturday’s council elections in the state that Nigeria had come of age with the use of card reader machine.
Wamakko, who is the immediate past governor of the state, said that the use of the device had shown that Nigeria was not averse to “global changes and emerging positive trends”.
According to him, the use of card reader has also restored tremendous confidence of the nation’s electorate in the electoral system.
“The card reader has reduced the cases of rigging and ballot box-stuffing to the barest minimum.
“Gov. Aminu Tambuwal and SIEC in the state deserve a pat on the back for using the card reader in today’s local government elections in the state for the first time.
“Nigerians must be allowed to freely vote the candidates and political parties of their choices”, he said.
The lawmaker urged other state governments to emulate Sokoto state in the use of the card reader.
Similarly, Deputy Governor of the state, Alhaji Ahmed Aliyu, expressed support for continued use of the card reader, saying that it would help in produce the desired leaders as wished by the people of the state.
Aliyu stated this while speaking with newsmen after casting his vote at Tudun-Wada.
“We are committed to conducting free and fair polls and that was why SIEC employed the use of the card reader.
“Other states should emulate Sokoto, while I am appealing to the people of the state to remain law-abiding during and after the polls” he said. (NAN)