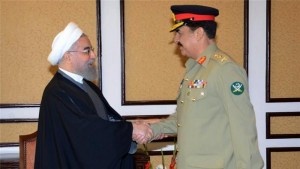 Iran’s Foreign Minister Javad Zarif has announced that his country will “further boost” its military arsenal, in response to a US move banning two companies with alleged links to the Iranian ballistic missile programme. Zarif said on Saturday that there are no limits to Tehran’s missile capability, “because this programme has nothing to do with nuclear weapons”, the state television PressTV quoted him as saying.

“We will respond to recent US measures against Iran’s missile programme by further boosting our missile power,” Zarif, speaking from the Pakistani capital Islamabad, said.  Zarif was traveling with President Hassan Rouhani, who was on a two-day state visit to Pakistan. Last December, Rouhani had ordered Iran’s Defence Minister Hossein Dehqan to accelerate the production of “various types of missiles”, to improve the country’s defence.

Three months later, Iran tested the long-range Qadr and Qiam ballistic missiles during military exercises on March 8 and 9. In response, the US blacklisted on Thursday the Shahid Nuri and Shahid Movahed industries, for supporting a company directly involved with Iran’s missile programme. Last July, Iran signed a nuclear deal with the United States and other world powers. But the agreement left a number of differences unresolved, including the issue on the use of ballistic missiles.