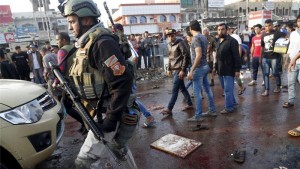 Dozens of Iraqi soldiers and a general have been killed in separate suicide bombing attacks in Baghdad and Fallujah. Two consecutive suicide bombers from the Islamic State of Iraq and the Levant (ISIL) group killed at least 25 Iraqi soldiers and Popular Mobilisation Force fighters when they targeted their convoy in the village of Jumailah in northern Fallujah, military sources told Al Jazeera.

Tuesday’s bombings came a day after four ISIL suicide bombers infiltrated an army headquarters west of Baghdad, detonating their explosives and killing an Iraqi general and five soldiers, according to police and army officials.

Late on Monday night, those bombers struck a regimental headquarters in the Haditha area of Anbar province, killing Staff Brigadier General Ali Aboud, Lieutenant Colonel Farhan Ibrahim and four others, the sources said. Suicide bombings and other attacks against Iraqi forces and other groups have become increasingly common in Iraq in recent months.

Earlier on Monday, a suicide bomber blew himself up at a funeral in Miqdadiyah, a town northeast of Baghdad in the province of Diyala, killing at least 38 people and injuring scores more. Later on Monday, at least eight security-force personnel were killed in attacks targeting a checkpoint in the western Baghdad suburb of Abu Ghraib, police sources said.