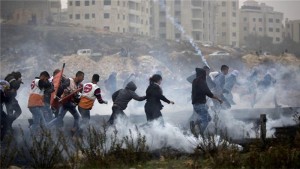 Israeli forces have killed a Palestinian and injured several more by live ammunition during an incursion into a refugee camp in the occupied West Bank.

Eyad Omar Sajadiya, 22, was shot dead, while at least ten others were injured by live fire during Tuesday morning’s clashes with Israeli troops in the Qalandiya refugee camp, according to Palestinian medical sources.

The armed clashes broke out after an army jeep entered the camp – situated between occupied East Jerusalem and the central West Bank city of Ramallah – by mistake, an Israeli police spokesperson told the AFP news agency.

Palestinian protests against Israel’s occupation have increased and tensions have soared in the occupied territories and Israel since October, as anger gave way to violence.

A wave of violence in Israel and the Palestinian territories since October has killed 178 Palestinians as well as 28 Israelis, an American, a Sudanese and an Eritrean, according to an AFP toll.