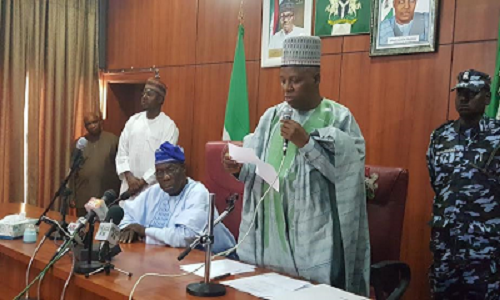 Governor Kashim Shettima of Borno State yesterday said that it took 19 days after the abduction of hundreds of Chibok schoolgirls for ex-President Goodluck Jonathan to call him as the Chief Security Officer of the state.
Boko Haram gunmen on the night of April 14, 2014 stormed the Government Girls Secondary School in Chibok, Borno State, where they abducted over 200 girls, who were preparing for their examination.
The abduction sparked local and international condemnation with then President Jonathan at the receiving end for his apparent slow response to the development.
The Borno governor, who spoke yesterday when ex-President Olusegun Obasanjo, who is on a two-day visit to the University of Maiduguri, visited him at the Government House, said Obasanjo would have handled the issue differently were he to be at the helm of affairs of the country at that time.
“In our case, Your Excellency, after the Chibok abduction of over 200 schoolgirls in April, 2014, it took 19 days for me to receive a call from the Presidency”, he said.
“I brought this mainly to show the difference, because we will only appreciate scenarios when we make comparisons”.
Shettima, who showered praises on the former president for having a hands-on approach to issues when he was president, disclosed that “Someone even told me that as President, Baba Obasanjo had phone numbers of traditional rulers and resident heads of security establishments in states that were prone to crisis and he sometimes spoke with them directly to get firsthand information.
“Without crisis, he created time to call traditional rulers to make enquiries about communal stability, ethno-religious co-existence and community policing in order to forestall problems. In our case, Your Excellency, after the abduction of over 200 schoolgirls in Chibok in April, 2014, it took 19 days for me to receive a call from the Presidency. I brought this mainly to show the difference, because we will only appreciate scenarios when we make comparisons”.
Obasanjo, who arrived in Maiduguri about 11 am, visited Shettima at the Government House.
The governor said Monday’s visit was the former president’s first call at the Borno Government House since 1976.
Mr. Obasanjo’s visit to the state is at the instance of the management of UNIMAID, following his request to excuse himself from the forthcoming convocation of the university billed to hold soon.
Mr. Shettima could not hide his excitement, describing himself lucky and privileged to receive Obasanjo in his office as a sitting governor.
“Your Excellency, Sir, majority of Nigerians salute you; we adore and respect you and we shall forever be grateful to you for standing for the unity, continued existence and the recovery of Nigeria when Nigerians needed you most”, he added.
Obasanjo, who praised the Borno State governor, urged the Federal Government to embark on detailed research to document the Boko Haram insurgency for posterity to learn from.
He also hailed President Muhammadu Buhari for his efforts to end the Boko Haram insurgency in the Northeast.
“I know that he (Buhari) is concerned about the insurgency. He has got it right that first of all there must be military ascendency over the insurgents”, he said.
“I do travel a lot in Africa and outside Africa. Where I have gone in recent times, what the people wanted to know is how Nigeria is coping with the situation of insurgency.
“I think we are not out of the woods yet, but it appears we can see the light beyond the tunnel”, Obasanjo said.