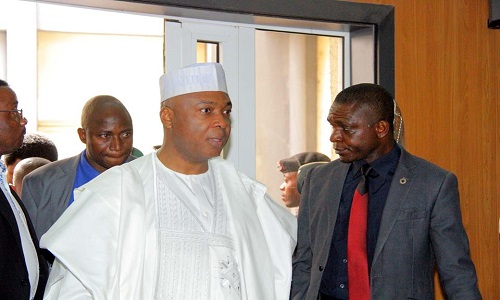 A youth group has called on President Muhammadu Buhari to put the All Progressive Congress (APC’s) house in order by intervening to stop the trial of Senate President Bukola Saraki at the Code of Conduct Tribunal.

The youth, under the aegis of Katsina Youth Awareness Forum, said they believe the trial of Mr. Saraki is politically motivated.

The Senate president is standing trial at the CCT on charges related with money laundering and false declaration of assets when he was governor of Kwara State.

The Supreme Court last month gave the tribunal the go-ahead to continue with the trial, dismissing an appeal filed by Mr. Saraki to stop same.

In a statement issued yesterday at the end of its meeting in Katsina and signed by its National Coordinator Engr. Ibrahim Salisu Dutsinma, the forum said Buhari should apply a political solution to resolve the issue rather than allow it to linger longer, which may not help the APC as a party and the nation at large.

The statement said Mr. Saraki has shown enough loyalty in many instances on his relationship with the president, citing the ministerial screening as example.

“We urge the president to as a matter of urgency call on the APC leadership to put behind them what happen during the election of the Senate president and forge ahead with the policies that benefit the Nigeria masses”, the statement said.

“We as group of youths from the president’s home state of Kastina remain steadfast to the course of unity, peace and development of our country on which democratic sustainability is built. We shall always uphold the sanctity of truth and justice like in the case of Senator Bukola Sariki because he was elected by his colleagues”, it added.