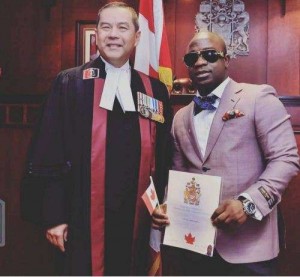 One of the sons of legendary musician, K1 De Ultimate, Adetunji Ayinde Marshal aka AK M’Marshal has attained a dual citizenship.

The ‘Loke’ rapper has officially become a Canadian citizen after over twenty years of living in the North American country where his father once stayed.

A graduate of English from York University, M’Marshal who just dropped his newest single, ‘Sexy Girl’ hinted about his new citizenship when he posted photos from the ceremony on Instagram.

Fuji musician, KWAM 1 received favour from the most revered king in the Yoruba kingdom, as the Ooni of Ife, Oba Adeyeye Enitan Ogunwusi showered prayers on his children at the coronation of the new Olubadan of Ibadan, Oba Saliu Akanmu Adetunji l held on Friday, March 4, 2016