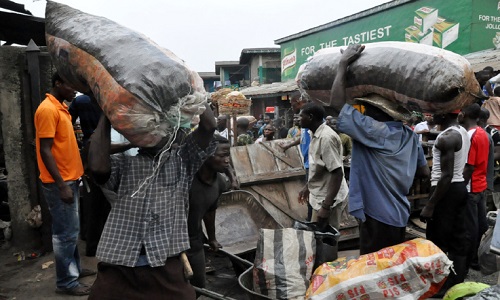 The Lagos State House of Assembly has called on Governor Akinwunmi Ambode to relocate the Mile 12 market on Ikorodu Road to a more conducive location.

The call was sequel to last week’s bloody clash between Hausa traders and Yorubas, which left at least 10 persons killed and properties worth several millions of naira destroyed.

Reacting to the incident on Monday, the Assembly described it as unfortunate, adding that it could have been averted.

The issue was brought under matter of urgent public importance by Jude Idimogu.

The lawmakers urged Governor Ambode to relocate the Mile 12 and Owode-Onirin markets elsewhere after feasibility studies and accompanying infrastructure must have been provided.

While condoling those who lost loved ones in the crisis, the Assembly condemned the killings and the attitude of soldiers deployed in the market, who it alleged could not forestall the crisis.

It also urged Ambode to constitute a high-powered enquiry into the skirmish.

Earlier, Speaker Mudashiru Obasa said the incident followed disagreement among brothers, adding that government should act decisively on the issue.

He said: “Soldiers have been stationed at the market since 1999, yet they have not been able to solve the problem.

There is a police station there, what did the Divisional Police Officer (DPO) do, when the incident occurred?

“It is a market without structure; we can move the market to another place if we can provide an alternative. We should look at a new planning; we cannot have such a market at the centre of a megacity”.

Obasa further called for the probe of military men stationed at the market since they could not forestall the riot and suggested the installation of Closed Circuit Television (CCTV).

In the same vein, Deputy Speaker Wasiu Sanni Eshinlokun said the market was not well organised, adding that a visit there would reveal that it is not a conventional market.