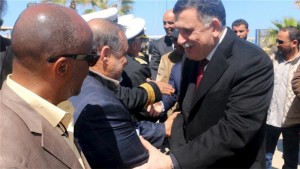 Members of Libya’s UN-backed Government of National Accord arrived in Tripoli on Wednesday, defying threats by rival factions that it was not welcome in the capital. Reports of sporadic gunfire and road blocks leading into Tripoli later emerged, with questions raised whether violence would erupt, or a peaceful transition of power would ensue.

The Presidential Council was formed under a UN-mediated peace deal late last year in an effort to end the political chaos and conflict that has beset the country since the uprising that toppled Muammar Gaddafi five years ago. It is supposed to replace the two rival administrations – one based in Tripoli, the other in the eastern city of Tobruk – that have been battling each other for more than a year.

Tripoli’s self-declared government and armed groups that back it had in recent dayswarned the unity government not to travel to Tripoli.  But seven members of the council, including its head and Prime Minister-designate Fayez al-Sarraj, arrived in the Libyan capital by sea and set up a temporary seat of power at a naval base.  The officials were prevented from flying into Tripoli by the rival government.

“At this blessed historic moment, we announce to our people the start of National Accord Government work from Tripoli and the beginning of a new era of dialogue and communication with the sons of our people, regardless of their political attitudes,” Sarraj told a news conference after his arrival.