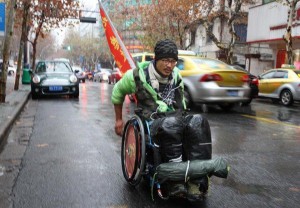 While most people view wheelchairs as a symbol of disability and confinement, this young man from China is proving the opposite – over the past couple of years he has been using his wheelchair to fulfill his lifelong dream of backpacking across the country. 29-year-old Quan Peng began his epic journey from Beijing on August 31, 2014, spending a whopping 566 days on the road before reaching Fuzhou city last Thursday. So far he’s traveled a total of 2,800 km spanning the length and breadth of the nation, but his trip is far from over. He still plans to cover another 1,700 km to Sanya, in China’s southernmost province of Hainan, before calling it a day.

“This is the fifth province and 22nd city I’ve passed through during my trip,” Quan told local media after reaching Fuzhou. “My fate deprived me of my freedom. I have to get it back by any means necessary. Along with wanting to see the world with my own eyes, I also am making this trip so that people will see the importance of having barrier-free facilities.” In each of the cities he has visited, Quan made it a point to document the type of facilities available for disabled people like himself. Sadly, he reports that in most places such conveniences are non-existent.

Quan, who is originally from Gansu province, lost the use of his legs at age 17 when he underwent a surgery to remove a tumor from his spine. The procedure damaged his nerves, permanently paralyzing his legs. But he refused to let fate dictate the rest of his life, choosing to move to Beijing in 2013 to make a career for himself.

He started off working in customer service and spent his spare time managing a Taobao online store, but his life’s dream was to see the world. Although initially skeptical about traveling in a wheelchair, Quan eventually decided to do it. His first day on the road was far from easy – he had traveled 60 km and used up every ounce of his strength in the process. He developed a sharp pain in his shoulder the very next day, but giving up was never an option, so he just pushed through it.