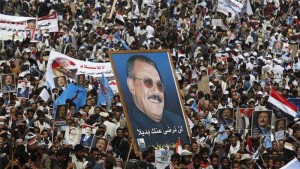 Tens of thousands of Yemenis took to the streets of the capital Sanaa on Saturday to mark the first anniversary of the war between a coalition led by Saudi Arabia against Iran-allied fighters who had overthrown the government. The gathering, one of the biggest in Yemen since mass protests in 2011 forced President Ali Abdullah Saleh to step down, took place ahead of a ceasefire and UN-sponsored peace talks next month.

Saleh, an ally of the rebel Houthi group, made a rare appearance at the gathering, his first since the war began, offering an olive branch to the coalition.  Yemen analyst and journalist Peter Salisbury told Al Jazeera that more people turned up at the rally in their opposition to Saudis rather than support for Saleh or Houthis. “We extend a hand of peace, the peace of the brave, for the direct talks with the Saudi regime without a return to the (UN) Security Council, which is incapable of resolving anything,” Saleh told the crowd.

Salisbury said that Houthi’s decision to enter into talks with Saudis has upset Saleh. “There is division between his loyalists and Houthis.” The UN envoy announced this week that the warring parties had agreed to a cessation of hostilities starting at midnight on April 10 followed by peace talks in Kuwait from April 18 as part of a fresh push to end the crisis following two rounds of failed talks last year.

The coalition joined the war to try to stop the Houthis from taking control of Yemen and to restore President Abd-Rabbu Mansour Hadi to power.