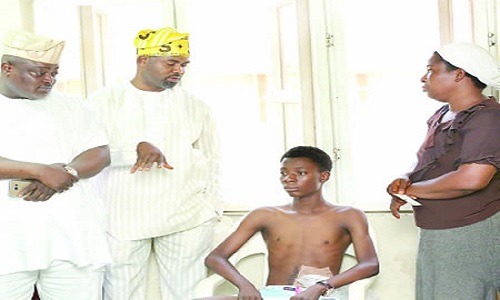 Speaker of the Lagos State House of Assembly, Mudashiru Obasa, has paid a visit to the 16-year-old boy, Bolaji Kalejaiye whose intestines were ripped open when he was hit by stray bullets in the recent crisis that engulfed Mile 12, Ketu area of the state.

Master Kalejaiye was reportedly returning from the Joint Admissions and Matriculation Board’s CBT when he was hit by stray bullets during the crisis between Hausa traders and their Yoruba hosts.

In a rather courageous move, which probably increased his chances of survival, the young boy rather than panic, reportedly packed his intestines, which were already gushing through the opening left by the bullet piercing his body and ran to a nearby police station but was turned away by the policemen on duty.

Luck, however, came his way when he was rescued and taken to a private hospital by passers-by from where he was transferred to the Ikeja General Hospital.

Speaking at the boy’s bedside at the Ikeja General Hospital, Ikeja, Lagos, Obasa commended Bolaji’s courage and desire to live despite being hit by stray bullets.

“When I read your story, I was moved by your courage. It was through sheer courage that after being hit by stray bullets and your intestines spilling out, you still had the courage to pack your intestines and run to the police station.

Earlier, his mother, Mrs Alero Kalejaiye, used the opportunity of the visit by the Lagos Assembly speaker to solicit for financial help to save her son.

She also used the opportunity to call for public attention to the current plight of her son, who is still battling to stay alive.

“I am impressed by your good gesture and Almighty God will continue to bless you. However, I still want to appeal to Nigerians to come to our aid”, she said.