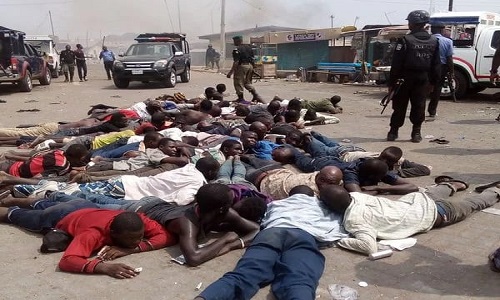 The All Progressives Congress, APC, in Lagos State has decried the recent crisis that engulfed Mile 12 Market, which led to scores of death and destruction of several property.

The APC said the crisis was needless and targets the peaceful coexistence that has existed in Lagos.

In a statement issued on Sunday and signed by the Lagos State Publicity Secretary of the APC, Joe Igbokwe, the governing party urged the various groups and factions in the crisis to maintain the peace and follow the processes laid down by the Lagos State government to restore peace in the area.

It also enjoined leaders of the various ethnic communities in Lagos to respect the rights and interests of other ethnicities and ensure that the state continues to play its role as a huge entrepôt of diverse shades of Nigerians.

“As a party that believes in the peaceful coexistence of all Nigerians in all parts of the country, we see the recent bloody crisis in Lagos as a drawback to the peace and well-being of the country and the peaceful coexistence of its diverse ethnic nationalities. We express this sentiment because we see the crisis as needless and grossly in contrast with the existing amity that has endured in Lagos for a very long time.

“We believe that all ethnic groups in Nigeria must imbibe tolerance and compromise for us to forge a united and prosperous nation and the taking up of arms at the slightest excuse. We did not see what reportedly happened in Mile 12 as capable of igniting the kind of violent reaction that followed it if we all see ourselves as united and we believe the leaders of the various ethnicities as well as religious leaders must intensify efforts to promote tolerance and peace among Nigerians.

“Lagos APC mourn the lives lost in the crisis and condolence with those that sustained injuries as well as those whose properties were destroyed in the crisis. We urge all to tap into the new vision for Lagos which requires every Lagosians to leave at peace and harmony with each other irrespective of tribe or tongue”.